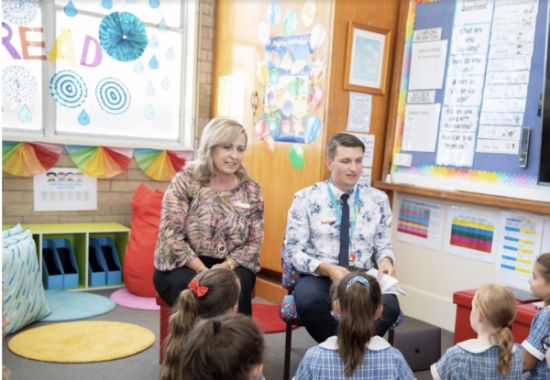 Good things seem to come in fives for our Mr Dylan Anderson. Fifteen years ago, he walked through the gates of St Michael’s for the first time. Five years later he was school captain. Now he’s back as our school’s newest teacher, sharing a class with the woman who first inspired his love for education – his Year Five teacher, Maree Hamilton.

"I’ve always been linked to the school in a way," said Dylan. "But to be here now, working with Maree on our own class together, is mindblowing for me."

Dylan’s connection with St Michael’s runs deep. Throughout high school, he helped out in Maree’s classroom whenever he had the chance. In Year 12, as school captain of St John the Evangelist Catholic High School, Nowra, he regularly returned to help Year Six students prepare for the often daunting transition to high school.

According to Maree, Dylan has always shown a willingness to go above and beyond to help others, and it comes through strongly in his teaching.

“Dylan is more than willing to take on anything,” she said. “He’s taught swimming, he does surf lifesaving and he runs the youth group with a few other teachers. He’s so devoted and excited, and he just takes the initiative.”

Dylan is already a hit with his new class. But despite his past leadership achievements, Maree said Dylan is the last person to let popularity go to his head.

“He won the vote for St Michael’s captain hands down,” she said. “But he never realised anyone thought that way of him. I had the privilege of phoning his mum with him. He was crying and so was I.” 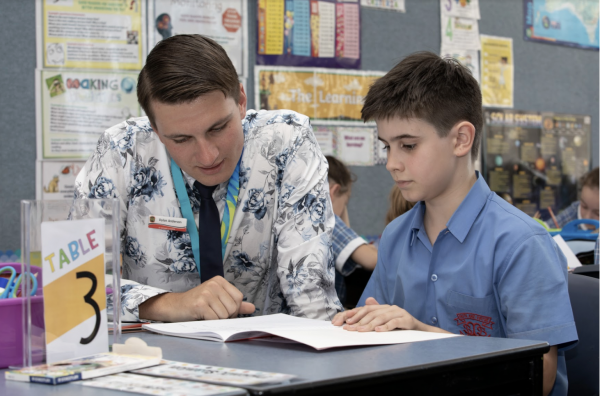 When you hear Dylan talk about his passion for role modelling and instilling positive values, his humility is unsurprising.

“Our job here is to live like Jesus – to love everyone,” he said. “In our system we’re so lucky to have religion to relate to. Values aren’t just taught through rules. There are so many stories and so many things we teach in religion that link directly to positive values and I love that.”

“Being able to show students what values look like, through the stories of Jesus and what he did is so important, because kids need to be able to relate to something. Kids take or leave religion – most of them take it and they love it and they live it. Either way, religion has the ability to teach students how to live responsibly and positively in society” — Dylan Anderson, teacher

Watching Dylan in the classroom, it’s hard to believe he ever considered a different career path. But once upon a time, he dreamed of working in a room full of animals, not students.

“Until Year Five I thought I would be a vet,” he explained. “But a couple of things about Maree – Mrs Hamilton back then – and the way she taught made me realise I wanted to become a teacher.

“Maree taught me to see the child before the student. As teachers, we can have a big influence on our students in a positive and powerful way. Every child has potential and we get to help them realise it.” 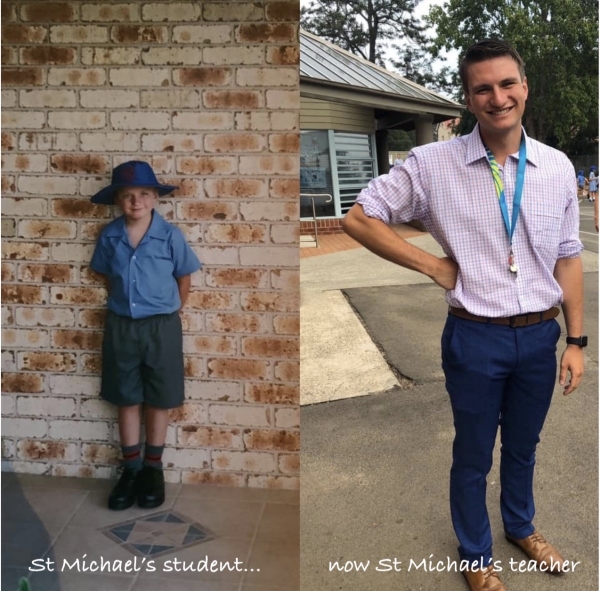 Maree has boiled down her 36 years of teaching experience into one key piece of advice for Dylan and other new teachers:

“I’ve always said, if you treat the kids the way you want your own children to be looked after, then you’ve got it no matter what” — Maree Hamilton, teacher

Only time will tell what’s in store for Dylan’s next five years, but one thing is certain – he’ll be doing whatever he can to change the lives of our students and staff for the better.

“I wanted to go into teaching to create change,” he said. “Almost every teacher who taught me is still here, so it’s nice to come back and help them, given how much they all helped develop me.”